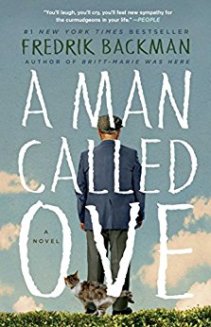 A Man Called Ove by Fredrik Backman has been on my cyber nightstand for a long time. Then the Swedish movie popped up on Netflix. When I finished My Grandmother Asked Me to Tell You She’s Sorry by the same author, it showed up as a recommended next read. Finally, the stars aligned and the Kindle version became available at Overdrive from my local library.

Ove (pronounced “Oova”) is a cranky old man, recently widowed and forced into retirement. Throughout the book we see the world through his eyes. Life is bleak and the changing world is filled with idiots. No one knows how to do anything anymore.

Here’s a sample of Ove’s worldview:

“Should one really have a driver’s license if one can’t drive a real car rather than some Japanese robot vehicle, he wonders. Ove doubts whether someone who can’t park a car properly should even be allowed to vote.”

“People didn’t know how to…brew some proper coffee. In the same way as nowadays nobody could write with a pen. Because now it was all computers and espresso machines. And where was the world going if people couldn’t even write or brew a pot of coffee?”

“People said he was bitter. Maybe they were right. He’d never reflected much on it. People also called him antisocial. Ove assumed this meant he wasn’t overly keen on people. And in this instance he could totally agree with them. More often than not people were out of their minds.”

As the book progresses, we learn Ove’s story is one of sadness, almost from the beginning. Nevertheless, the book is far from depressing because we meet Ove’s neighbors and the Cat Annoyance and see them interact in human and quite humorous ways. We feel empathy for the old grump.

This is a charming book, with many laugh-out-loud moments. I highly recommend you read Ove’s story. Then watch the subtitled movie, perhaps with the curmudgeon you love.