This column appeared in The Nevada Appeal in 2002, when I was DEEP into scrapbooking. I am no longer. While I still have the huge kit of supplies, I haven’t made a book since the one documenting our granddaughter’s first year. She’s almost ten. I have pretty much decided to scan all the remaining photos. Then I’ll organize them into those lovely little photo books I can assemble from the computer and without the huge mess that actual scrapbooking entails. 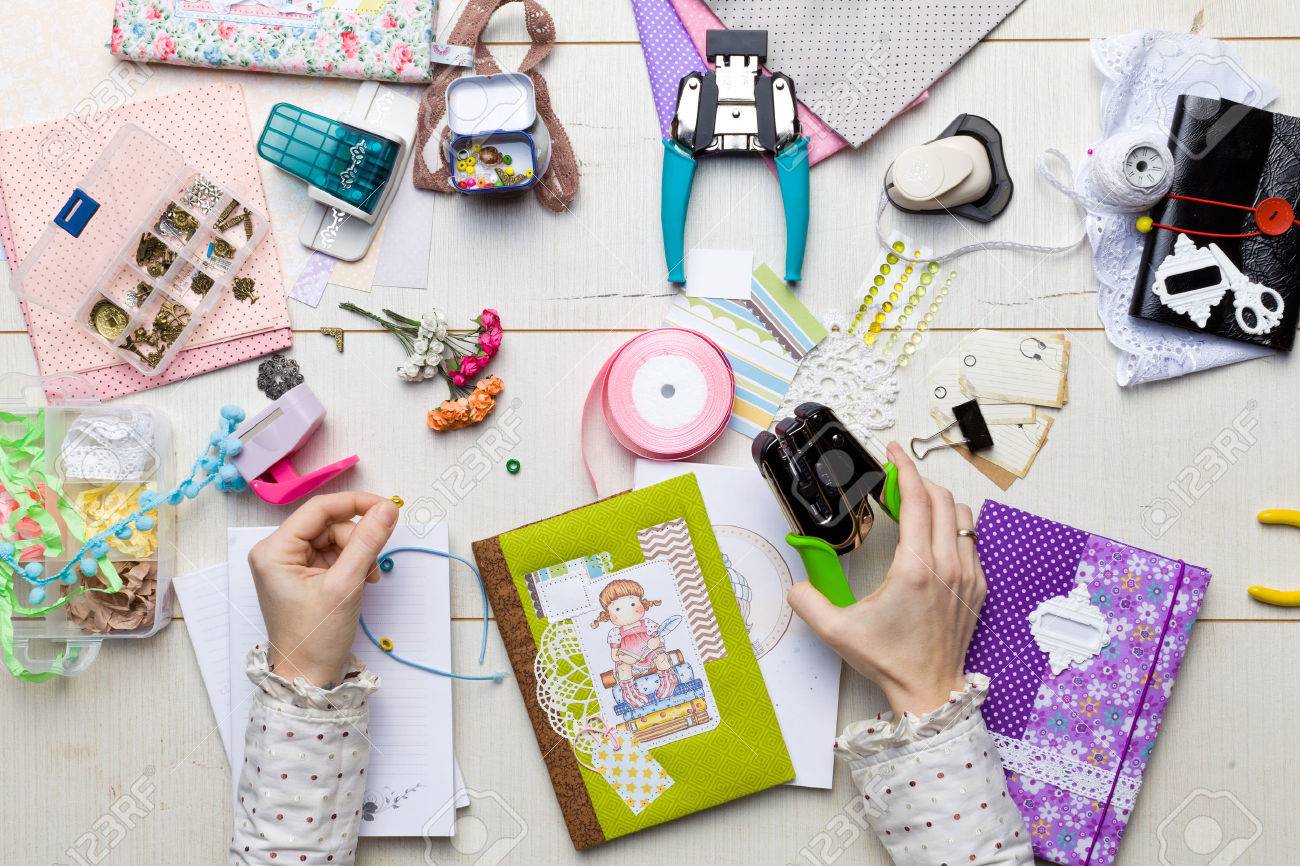 “Preserve your memories; they’re all that’s left of you.”  ~Simon & Garfunkel

My name is Lorie and I am a scrap-aholic. I admit my scrapbook hobby may be getting out of control. I’m also something of a pack-rat, although that’s another, oddly related topic.

The roots of my problem go deep. In the late fifties my mother gave me a large maroon scrapbook with fleur-de-lis adorning the cover. I filled its now crumbling and yellowed pages with black and white class photos of smiling schoolchildren. The names and numbers of some of those children are still in my address book nearly fifty years later. That book lives in the cedar chest with my wedding dress.

In college I made another scrapbook. It includes a photograph of me sitting in on the lawn at Fullerton College, protesting the invasion of Cambodia. It was in that book that I began writing little stream of consciousness notes so that I wouldn’t forget the people and moments that were so important at the time.

Around 1970 I started another kind of scrapbook. I bought one of the first little blank books and began copying quotes from favorite authors, poets, and songwriters. Walt Whitman, Kurt Vonnegut, Henry David Thoreau, Joni Mitchell, and Paul Simon. That red book is filled with handwritten entries in bright Flare pen colors. I also began entering bad little angst-filled poems and other pieces I’d written. It wasn’t exactly “Bridget Jones’s Diary,” but you get the idea. A diary or journal might have contained a complete chronicle of every thought, every feeling. A scrapbook allows some perspective and perhaps a little editing. Maybe even other voices.

Later I included the poem and Bible verse from our wedding and a letter I wrote to our unborn child when I was pregnant. Nearly twenty-five years later that letter opened the scrapbook I made for Joanna. I also recorded a few stories about each girl so that I wouldn’t forget what funny, wondrous, insightful little beings they were.

I guess that is the point of a scrapbook—remembering. But like most people my memory needs a catalyst, a phrase, an object, an image, a fragrance, or a song that sparks a long-dormant memory. That’s probably why I save all the things I do—that pack-rat thing I mentioned before.

Furthermore, significant events need to be framed with words for me. And while spoken words are gone in a flash, writing makes the moment permanent. I try to hold on to the moment, so I can revisit it or share it across time and distance.

Both happy and sad memories are important. One gives perspective to the other. All those experiences and choices brought me to this place. So, if I ever question who I am or how I got here, I have my own personal database.

Evidently millions of others have joined me in this scrapbook obsession. There are support groups meeting all over the country under the guise of scrapbook parties and workshops. There are entire stores dedicated to its products. I admit I own the enormous suitcase full of materials and tools, affectionately known as the “my husband’s going to kill me kit.”  If you’ve been to a scrapbook party, you know what I mean. The kit is filled with an album, extra pages, decorative paper, page protectors, pens, cutting and mounting tools, and way too many stickers. All archival quality, of course, and acid free.

In the last two years I have completed Joanna’s album and the two identical family histories that I gave my father and brother last Christmas. I also compiled a book about my trip to visit New York City after September 11.

Now that I’m working on Katie’s graduation album, I’ve gone back to the little blank book to remind me of her stories. I spent some time rereading and remembering. Look what I found:

“All my life I’ve been a collector of things—theater tickets, wedding napkins, notes passed hand-to-hand in seventh grade English class. Love letters written but never sent. The last flower to bloom in the weed field before it became a parking lot. Things are saved for a special reason and, if you are a collector, you know that you save many things even when you’ve grown away from the reason you saved them. Like old corsages that have become faded and brittle.”

I told you that the roots of my problem go deep. That paragraph came directly from that old blank book. I wrote it in 1970.

Another in the sometime series from “Annie Cooper’s Recipe Scrapbook.” The foods are all mentioned in my still-in-heavy-rewrite novel. Claire holds a tender spot in her heart for this recipe and for one particular member of the family it came from. Enjoy!

from the kitchen of Claire Jordan 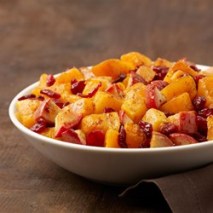 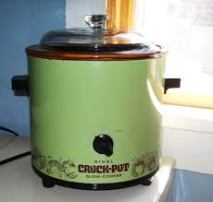 Auntie Claire isn’t much of a cook and I was surprised when Mom told me this favorite fall recipe was hers. When I asked Auntie Claire about its origin, she got a faraway look in her eyes and said it came from the mother of an old college friend. Somehow I got the feeling that there was more to the story.

Directions: In a slow-cooker combine all ingredients and stir. Cover and cook on low setting for 3-4 hours or on high for 1 ½ hours.

In Sylvia’s generation, most women didn’t work outside the home. She did. As a single mother, she had to. Nonetheless, she always made it look easy. Sylvia may have appeared serene, but she was paddling like mad beneath the surface.

From the kitchen of Sylvia Jordan

This is a lovely salad served on a bed of lettuce or croissants as a sandwich. Make it in the morning and let it chill while you are getting yourself and the house ready for company.

1 1/2 cups mayonnaise (substitute some plain yogurt for part, if desired)

Why novel? Because the cornmeal is mixed in, not made into cornbread batter and spread on top. Well, that and the fact that this food memory comes from one of the characters in my novel.

From the kitchen of Libby McCormack Cooper

While this wasn’t necessarily my favorite thing when I was growing, it now definitely qualifies as comfort food. I’ve adapted it a bit here–using Rotele tomatoes makes up for other seasoning–but it’s still pretty much as my mom made it. We like it topped with a little sour cream and served on a bed of shredded lettuce. Mom served it with a wedge of iceberg lettuce topped with a dollop of mayo that she called a “salad.” Times and food tastes have changed.

1 large can of diced tomatoes, with liquid

1 regular can of Rotele tomatoes with the added chilies, with liquid

1 regular can of corn, with liquid

1 regular can of whole or sliced large black olives, drained

Just in time for St. Patrick’s Day, another scrapbook page from Annie.

Scones
from the kitchen of Libby McCormack Cooper

These are so easy to make, especially if you have a stand mixer. I made them every year for St. Patrick’s Day at school. With only half a stick of butter for a big batch, they are pretty low in fat, if you worry about such things. And people tell me they have magical healing qualities so are the perfect gift to take to an ailing friend.

Variations: Raisins can be replaced with currents, dried cranberries, or other fruit. The cranberries work especially well if you substitute a little orange juice for some of the liquid and add a bit of grated orange peel. I’ve also added nuts or chocolate chips from time to time.

Quick Fudge Cookies
From the kitchen of Libby McCormack Cooper
Aunt Ellie made these for family picnics, but I think every Home Ec class in the 1950s and 60s made them too. They are great to make in the summer because you don’t have to turn on the oven and heat up the house. And who doesn’t like peanut butter and chocolate? You can even call them “healthy” because of the oatmeal, right? I think they’re gluten-free, too. Who knew?!

Cook Mixture #1 at rolling boil for 1 minute. Remove from heat. Add Mixture #2. Mix well and drop by spoonful (or use that scoop again) onto wax paper. Let set until firm and cool. 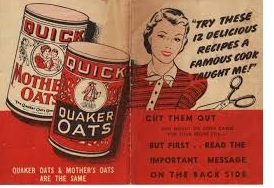 This is the first installment of what I hope will be a regular feature here under the category “Annie Cooper’s Recipe Scrapbook.” Second and third helpings will be available in coming weeks.  I’ve wanted to include recipes in my book for some time because I love how Laura Kalpakian included them in her wonderful novel, American Cookery . However, I haven’t been able to do so as elegantly as she did. Yet. For now, consider this an archive (and maybe a teaser) for my book.

Annie, the twenty-something daughter of one of my main characters creates a scrapbook of her family’s favorite recipes as a gift for her mother, Libby McCormack Cooper. Libby’s best friend is Claire Jordan, whose mother contributed this yummy recipe. Each recipe will be accompanied by a few cook’s notes from one of the characters.

Dutch Babies
From the kitchen of Sylvia Jordan
This big puffy pancake was Claire’s favorite Sunday breakfast. She thought it was magic the way it puffed up in the oven, but was always a little sad when it deflated. It’s the same basic recipe as for Yorkshire Pudding or Popovers. I think the original came from Betty Crocker, but I adapted it for the high altitude of Carson City, Nevada by adding more eggs. For breakfast, serve it with syrup, jam, fresh berries or applesauce. A dollop of whipped cream or yogurt doesn’t hurt. 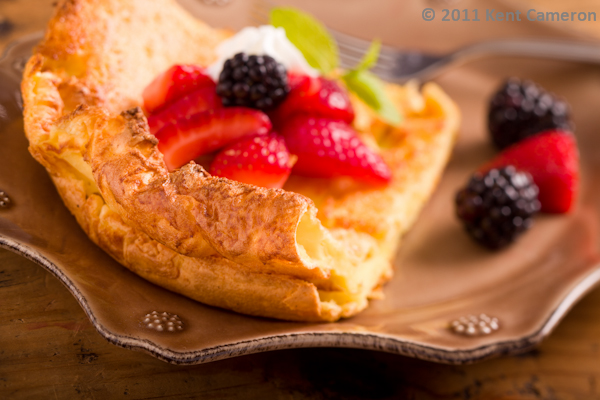